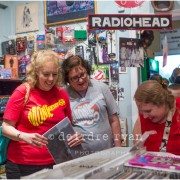 The Monkee’s album, Good Times, was made available on vinyl LP last week and Randy Now’s Man Cave in Bordentown, NJ had them in limited supply. Thankfully, we were able to get a copy before he was sold out. Our daughter loves The Monkees(thanks to her mom and dad) and really wanted to get this on vinyl. Like good parents, we’ve taught her how to use a record player and tape deck. With the LP she got a mini poster, a sticker, and a coloring book!
Here is what the tracks are with the songwriters and singers listed(thanks to Wikipedia):

1.”Good Times”
Harry Nilsson
Micky Dolenz with Harry Nilsson
2:46
2.”You Bring the Summer”
Andy Partridge
Micky Dolenz
3:00
3.”She Makes Me Laugh”
Rivers Cuomo
Micky Dolenz
3:00
4.”Our Own World”
Adam Schlesinger
Micky Dolenz
2:45
5.”Gotta Give It Time”
Jeff Barry/Joey Levine
Micky Dolenz
2:17
6.”Me & Magdalena”
Ben Gibbard
Michael Nesmith with Micky Dolenz
3:33
7.”Whatever’s Right”
Tommy Boyce/Bobby Hart
Micky Dolenz
2:00
8.”Love to Love”
Neil Diamond
Davy Jones
2:29
9.”Little Girl”
Peter Tork
Peter Tork
2:42
10.”Birth of an Accidental Hipster”
Noel Gallagher/Paul Weller
Michael Nesmith with Micky Dolenz
3:31
11.”Wasn’t Born to Follow”
Gerry Goffin, Carole King
Peter Tork
2:53
12. “I Know What I Know”
Michael Nesmith
Michael Nesmith
3:30
13.”I Was There (And I’m Told I Had a Good Time)”
Micky Dolenz/Adam Schlesinger
Micky Dolenz
2:15
Yes, that is Davey Jones on the album, it was originally recorded in 1967.
Once again from Wikipedia:
“The title track was written by Harry Nilsson and a surviving demo from the late 1960s was used incorporating Nilsson’s vocals posthumously in a “duet” with Micky Dolenz. Davy Jones performs the Neil Diamond-penned track “Love to Love” which was recorded in 1967 for the Monkees’ third album in a Don Kirshner-supervised session while the group was trying to gain musical independence from Kirshner. Once he was removed, the song was discarded in favor of recording an album of songs both sung and played by the group. The resultant album was Headquarters. For its inclusion on Good Times!, Dolenz and Tork contributed new backing vocals.”

I can only imagine what it must have been like hearing that track in the studio with Davey not being there….

It’s a very good album and one that I encourage you to listen and purchase on LP or cd or download off of iTunes. 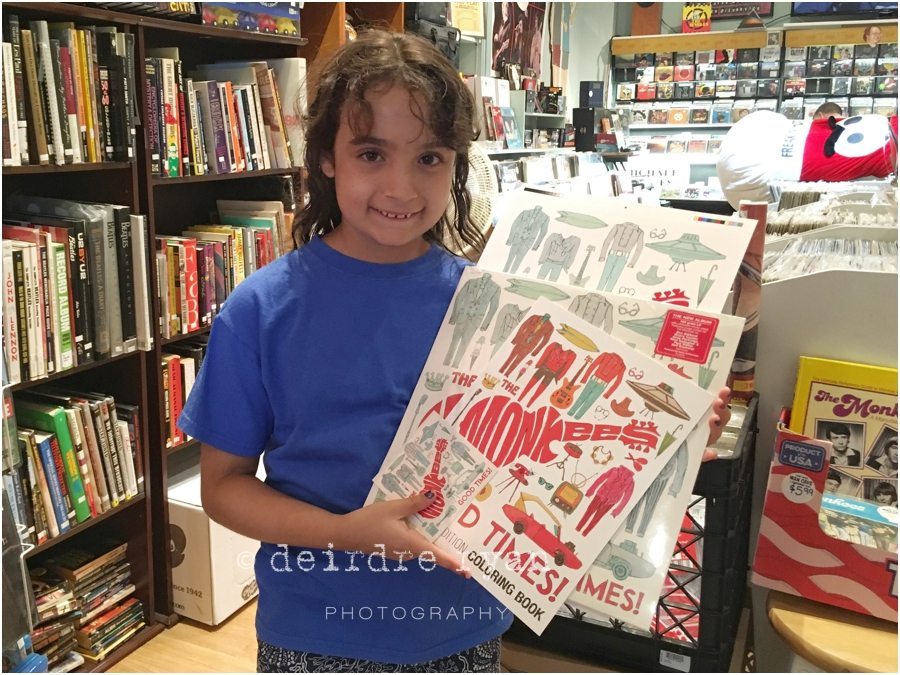 Here’s a cellphone photo of our daughter holding up her loot, The Monkee’s LP, Good Times, a coloring book, poster and a sticker. The rest I used my Canon Mark 5D III and Canon 24-70 f2.8mm L lens and some I used the Canon 600-RXT flash. 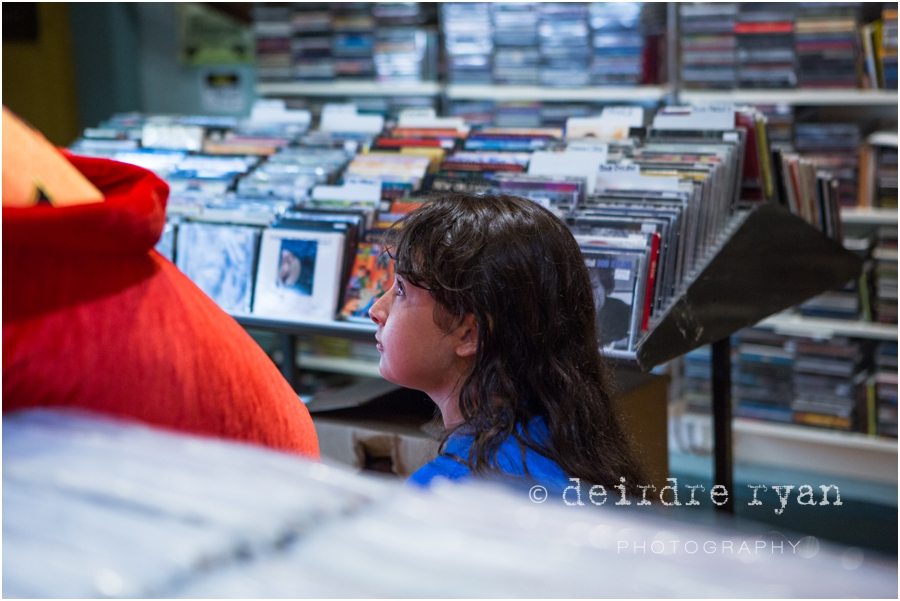 Randy was playing The Monkees tv show, so after I go our daughter the LP with the extra goodies that it came with, I took some photos. There was a photographer from The Burlington County Times, we chatted a bit. He took a photo of us in some way, but since I’m not a subscriber to that paper, I can’t see the article. I’ll go to the library and check it out there. 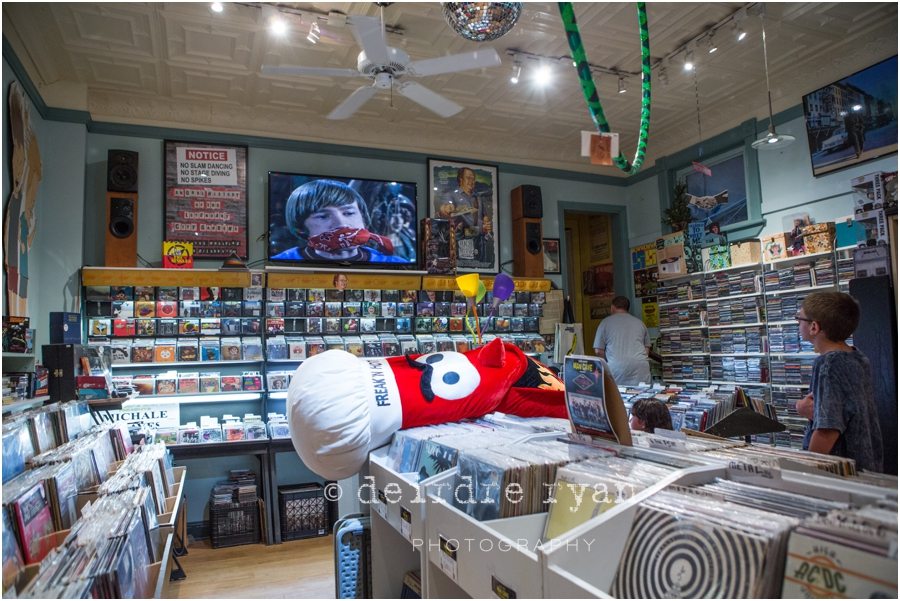 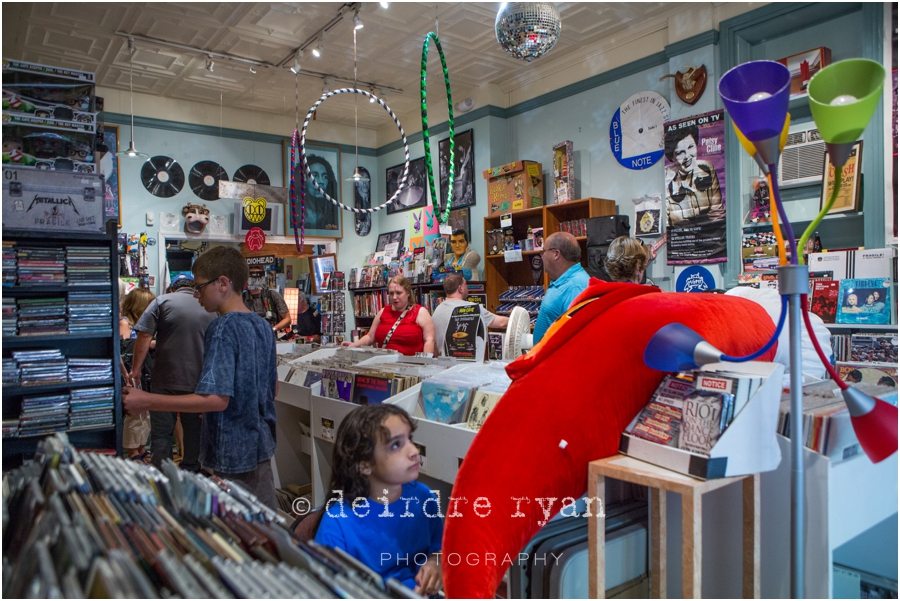 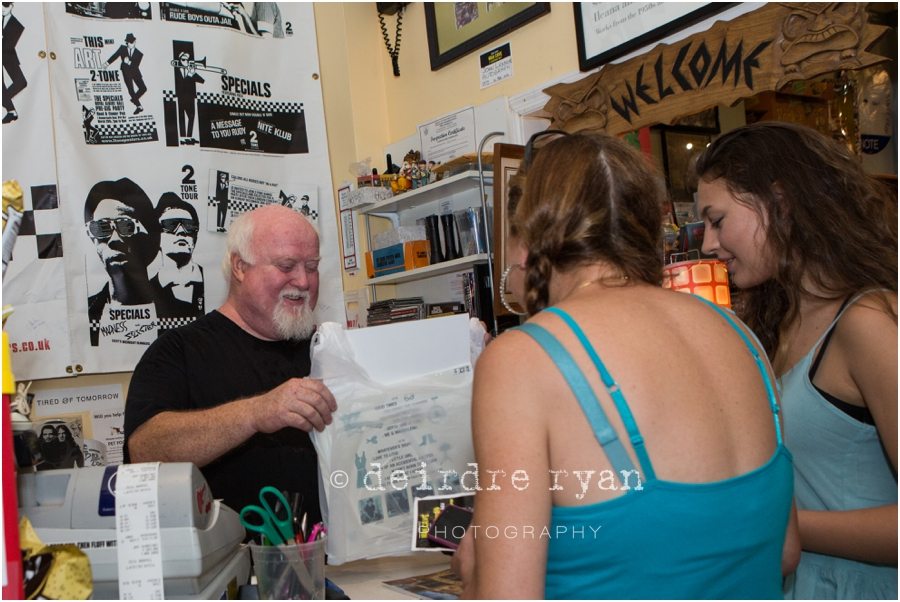 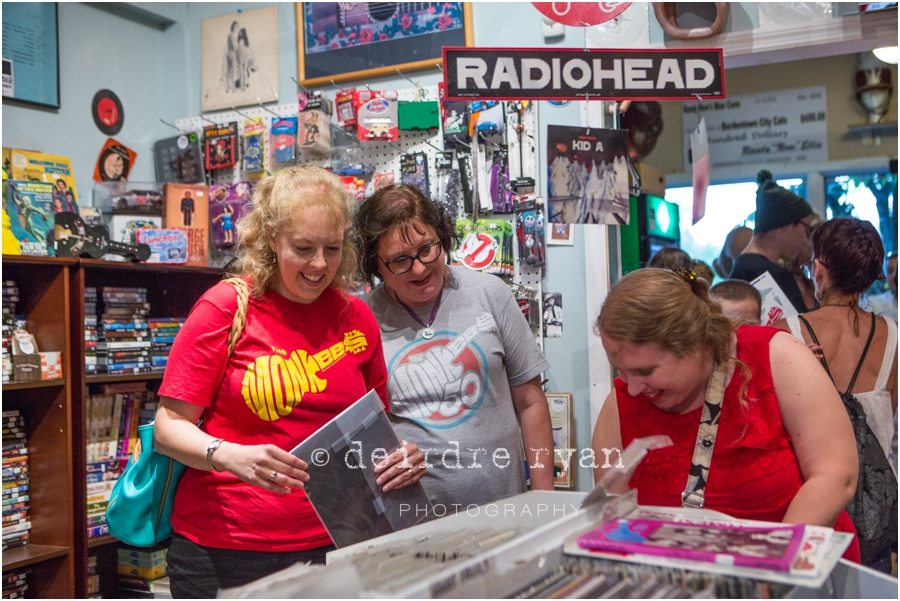 Some fans wearing their Monkees t-shirts to make their purchases and check out what else Randy had in the shop. 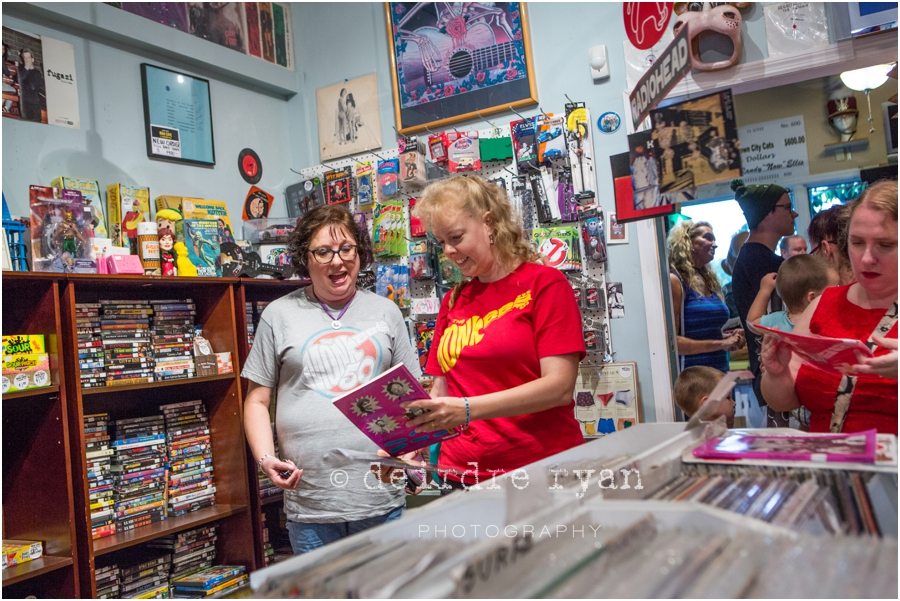 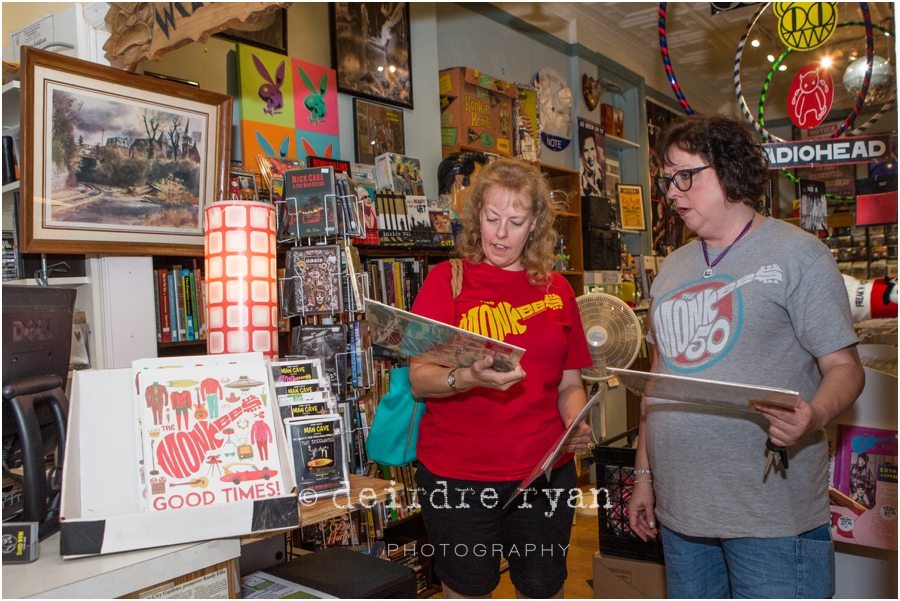 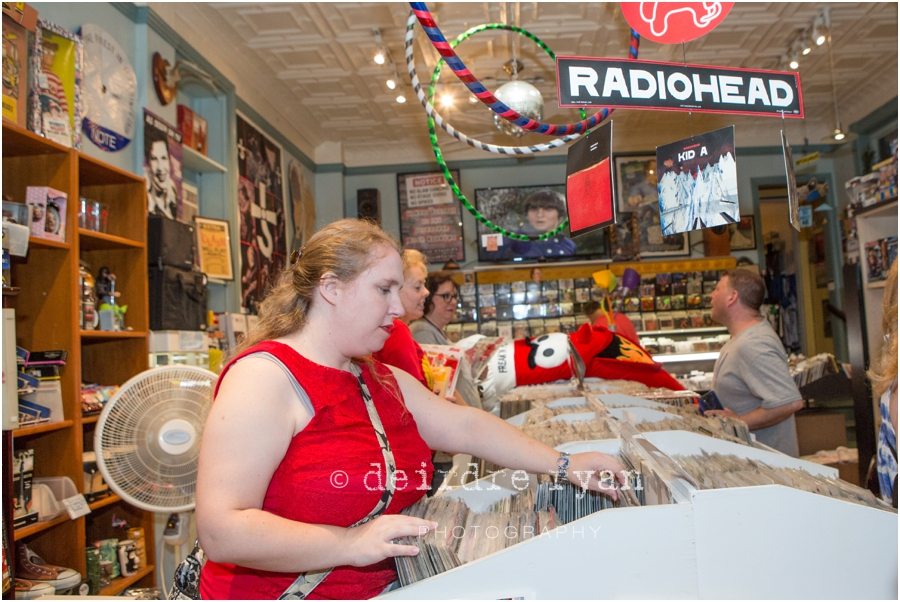 I use Twitter and when I posted and tagged Mickey Dolenz, he not only Liked this post, but retweeted it to his over 29K followers!  How super awesome is that? I’m still grinning from ear to ear 😀 Thank you again!!! 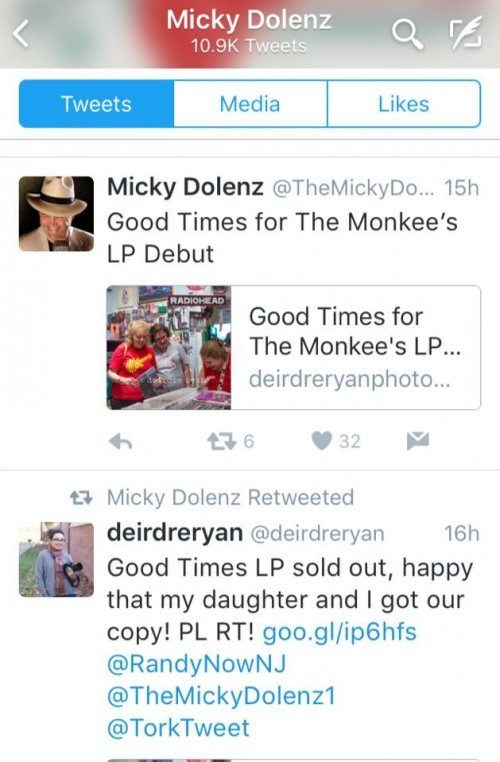 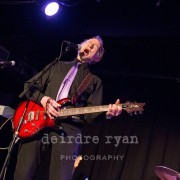 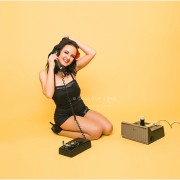 Did Someone Say Pin Up Photography? 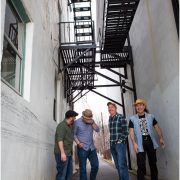