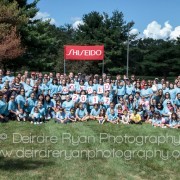 This blog is lacking in content because of what happened to me on July 29th, 2012. I was heading downstairs to my office and I fell down the stairs. My right ankle “folded” under itself to the left, breaking it in 3 places with damage to the ligament. Worse was my then 5 year old daughter saw and heard everything. She was actually well composed and played it pretty cool but was very worried.

Since this was in the basement, we got a neighbor to help David get me up the stairs and to the car and rushed me to the ER. I looked down at my ankle and knew it was broken, while my poor mom kept saying that perhaps it was just a bad sprain. But I knew that she knew it was broken too. 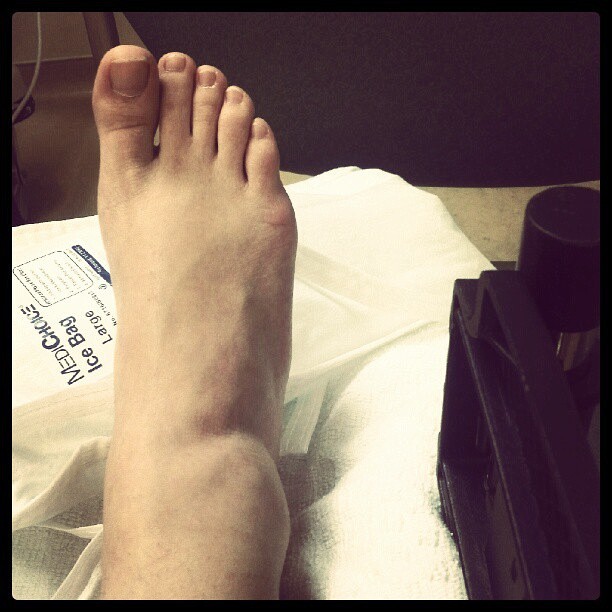 So I watched the opening night of the Summer Olympics in the ER on painkillers. And our living room became my “hospital room” for almost 3 months. Oy Vey……

The crazy thing was I still had photo gigs set up that I had to do. So I did them while on Percocet and a splint for my ankle up to my knee and photographed my clients. Then I had my surgery on August 8th, 2012.

The next 2 weeks were a living hell. The pain, the side effects of the painkillers, icing my ankle 24 hours was awful. My body was going through things I never expected. Natural childbirth was easier than this. 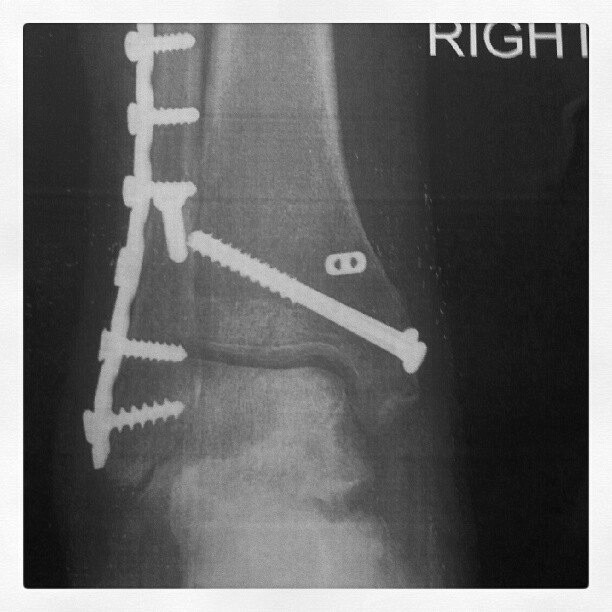 I ended up with 8 screws and a plate. 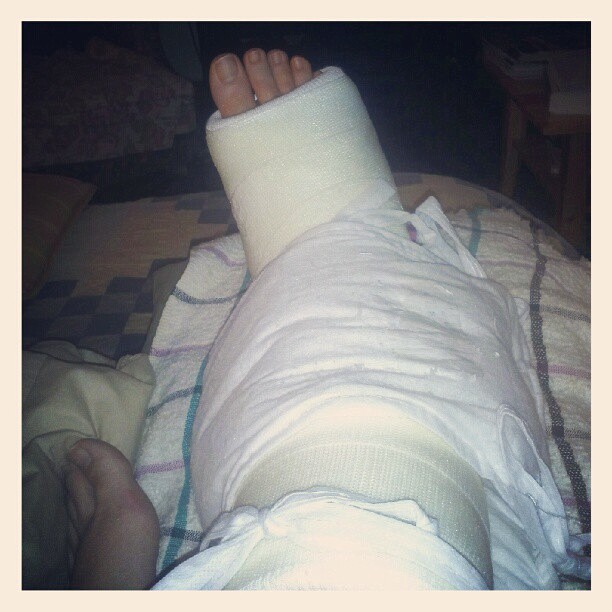 2 days after surgery, with ice. Ok the pain was HORRIBLE, but the worst was this was during the summer. I couldn’t go to the pool, or go out, or anything. Thank the Lord I had the help of my parents and my husband who bless him, slept downstairs with me. It was a good thing too, I had some really rough nights. Plus we have a full bathroom on the first floor. And I must mention this, you need to also keep your foot elevated above your heart at ALL times. 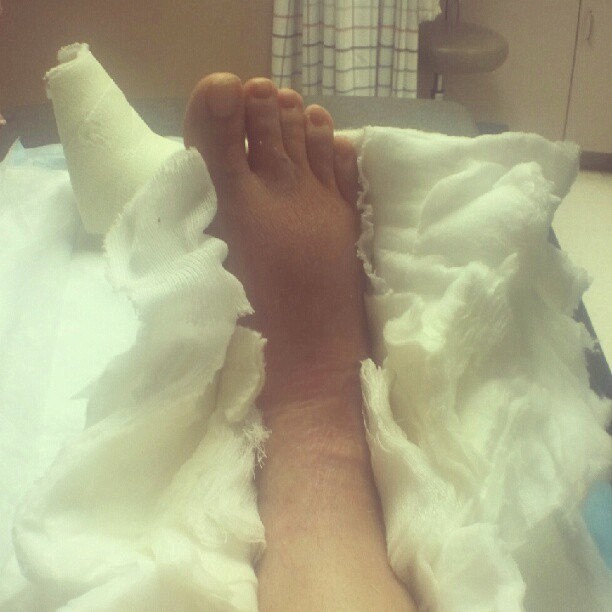 Franken-Foot revealed. Oh and by the way if anyone tells you that getting staples out doesn’t hurt, it’s a lie! I had a lot of them and I felt each one. The nurses thank God were quick 🙂 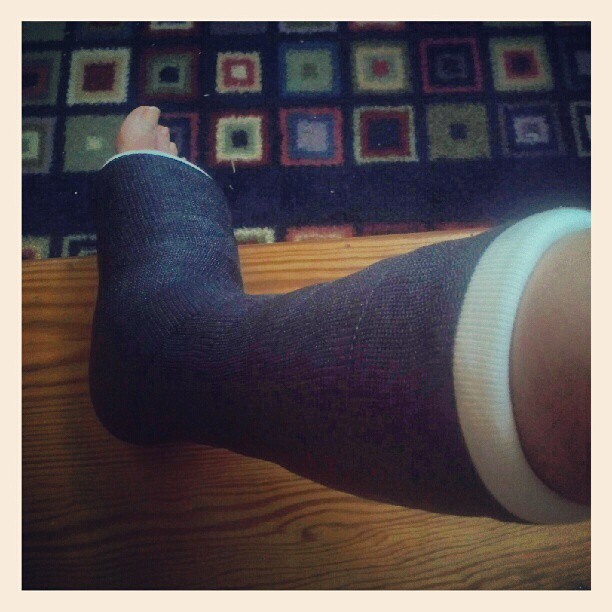 2 weeks after surgery, I was put in a snazzy non weight bearing cast. I chose black, my daughter thought I should’ve gone with pink or purple of course 😉 Still had to be on the first floor, use crutches, etc. Oh and did I mention,  you need to also keep your foot elevated above your heart at ALL times. I still had to ice it but not as much. 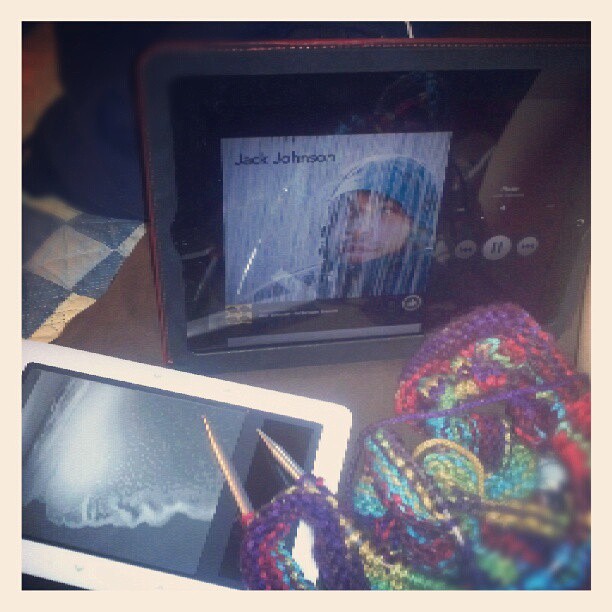 The 2012 Summer Olympics, iPad, movies, tv shows all in HD with knitting, music and my Barnes and Noble Nook were good friends. 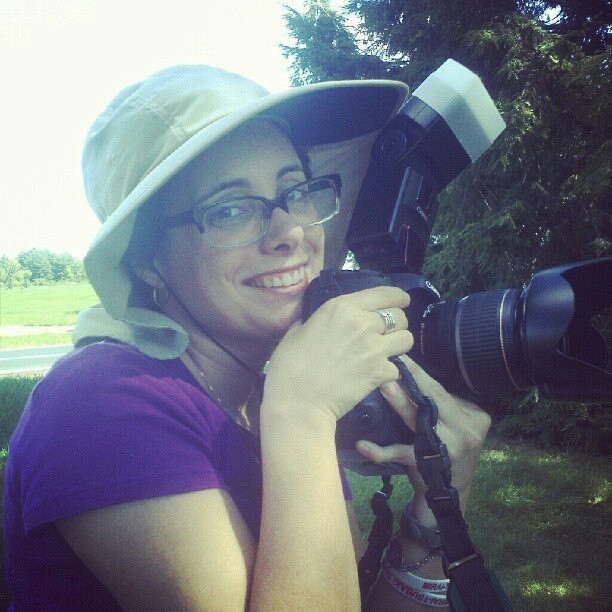 I somehow continued to photograph gigs! I was asked by Shiseido to photograph their company’s Hear Association Walk team members. So I did all in my black cast, check it out! 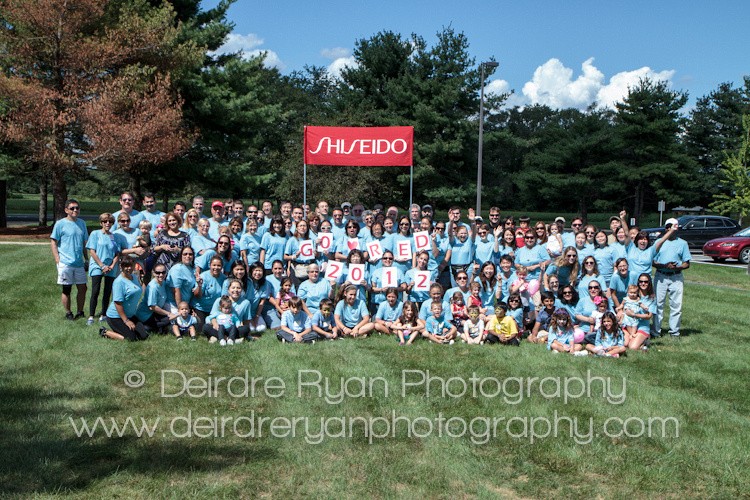 I went up a ladder with some help and did it. I also booked 2 weddings! My doctor told me he could fix me and he did. 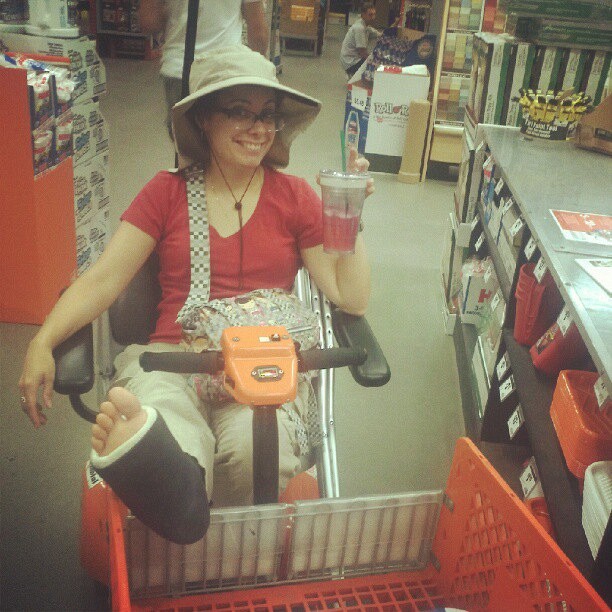 Getting paint at Home Depot. My husband took advantage of the situation and painted our bedroom. Notice the foot is elevated. 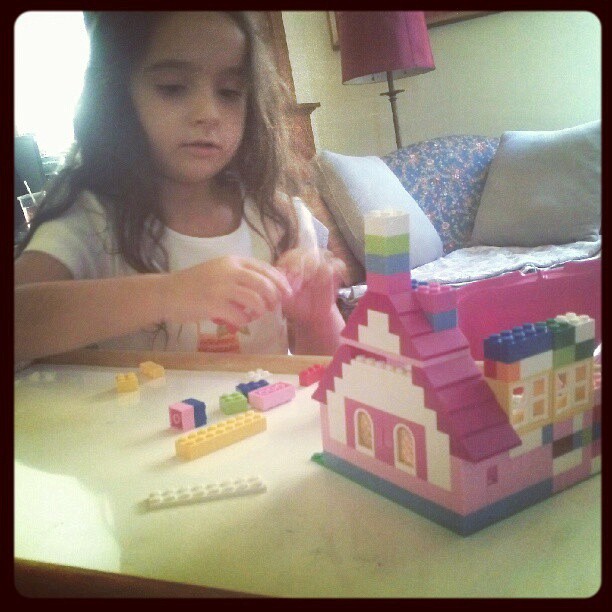 Spending time with my daughter. She got Legos for her 6th birthday and we played with them. We did quite a bit of together time like this. 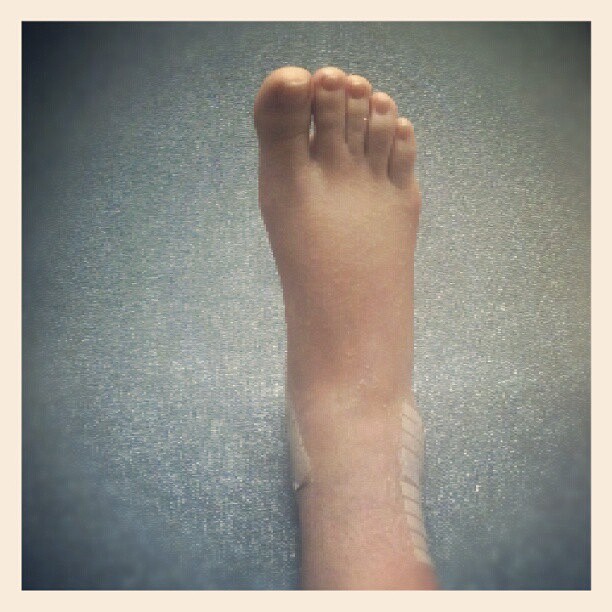 FINALLY after 4 weeks in the black cast I got it off but I was not allowed to put weight on it for another 3 weeks. But the plus side was now I could scoot up on my butt up the stairs and sleep in my own bedroom. It was bliss, same with the feeling of air on my leg!
So I rented a nifty scooter the same day. 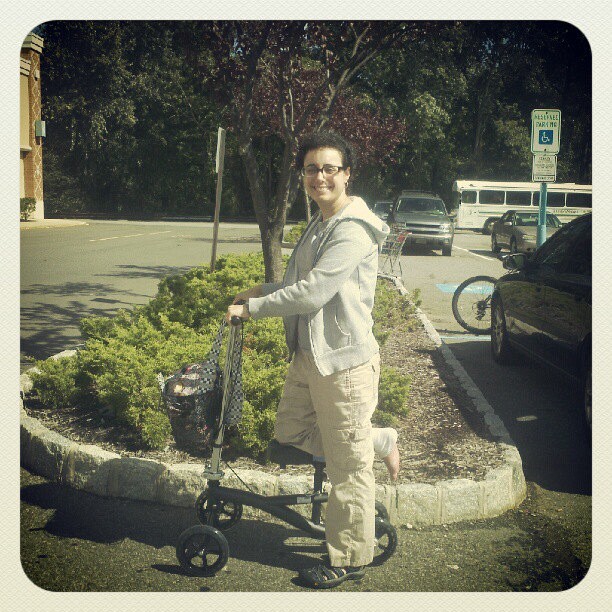 It was so cool and being who I am, I went as fast as I could with it. Not exactly a flattering image but you get the idea 😉 Oh and did I mention, you need to also keep your foot elevated above your heart at ALL times. 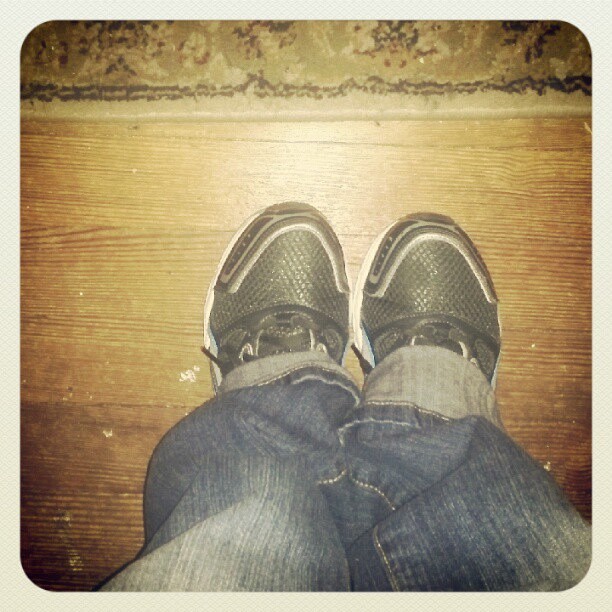 Finally, after 3 weeks, I got the ok to put weight on my foot. I used crutches but after 2 sessions of physical therapy I started to no longer use them. I still hobbled around limping a bit but I had sessions to do and a wedding coming up. This was shot on October 9th, 2012. I photographed a wedding on October 20th and yes….I.ROCKED.IT. 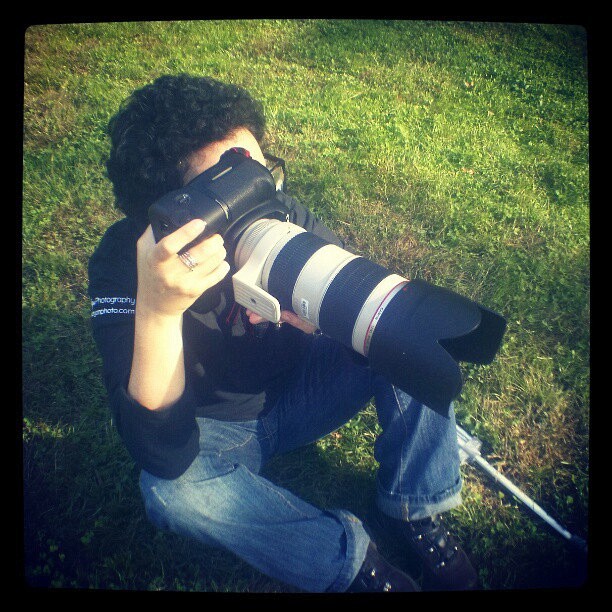 Me on location for a shoot.
I finished physical therapy around December  I was going twice a week. My first session they started me on weights because while I was in bed recovering, I continued to stay limber by stretching my legs, arms, doing leg lifts in both casts, touching my toes, etc.
Before my accident, I was doing really well physically, walking up to 3 miles on my treadmill, swimming, and you know carrying camera gear is a workout in itself. So I continue to stretch, do yoga, practice my balance techniques and get stronger every day. It’s going to take 9 months to a year to fully heal and recover. It still hurts in the morning and evening, I can tell when the Aleve is wearing off. And then the snap, crackle pop of the ankle is “pleasant”.
BUT I am fixed, just like my surgeon said he would do. I went to Trenton Orthopedics Group in Hamilton, NJ and my guy was Dr. Kunkle. My therapy was at Nova Care in Bordentown, NJ. Without their help and the love of my family and friends, I don’t know what I would’ve done.
Thank you!!!!!